Home // Blog // Lacrosse Recruiting // Western Shootout Preview: Where The Best In The West Meet With 80+ Coaches

Western Shootout Preview: Where The Best In The West Meet With 80+ Coaches 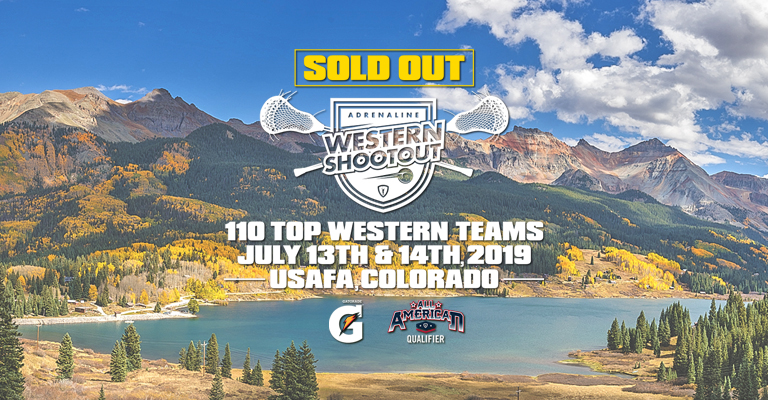 After completing nine events in June, the Adrenaline team is back on the summer circuit to put on the 18th annual sold out Western Showcase & Western Shootout weekend. Hosted at one of the most coveted athletic venues in the U.S., 110 elite western boy teams will compete at the United States Air Force Academy for two days of competitive games. The foundation of Shootout weekend was built on the idea of bringing together top western club programs to compete in one location. Shootout is one of Adrenaline’s oldest events and a hot ticket on the recruiting circuit for NCAA mens coaches in search of nontraditional lacrosse players. Colorado has proven a great meeting ground for this storied best-of-the-west event, with teams traveling in from 14 different states, including MI, MN, CO, ID, UT, OR, MO, NV, CA, IA, NE, TX, WA and IN.  The weekend schedule can be found on Tourney Machine here. Each team is guaranteed five games to showcase their skills in front of 80+ college coaches , while vying for a division championship so they can claim ultimate western bragging rights. Seven teams will be crowned champions on Sunday across the 2020- 2026 grad year divisions. Less concerned with the college-bound mentality, middle school & youth teams will fight to earn points towards a bid into the US Lacrosse Nationals tournament. US Lacrosse has a like-minded goal, which is to bring together the top youth programs nationally to compete in an elite event supported by well-known lacrosse operators from all over the U.S.

Players and college coaches alike will arrive on the Air Force Academy base on Friday evening for the Western Showcase. Out of 110 tournaments teams, the showcase features only 200 elite western players, allowing the recruiters to get a solid first look heading into the weekend. Players will be split up by position and run through a series of drills and scrimmages led by college coaches. Among the colleges attending are Denver, Ohio State, Navy, High Point, Delaware, Jacksonville, Bryant, Monmouth, Bucknell, Virginia, Vermont and Cleveland State. The players will learn and interact with the college coaches before taking the field at a distance the following two days. Conversely, NCAA coaches will get a feel for the talent and plan their scouting schedule accordingly for rest of the weekend.

Be sure to check out our social channels for behind-the-scenes looks all weekend long! Please share your experience with us using the below hashtags for a chance to be featured on our story! Stay tuned next week for a recap of Standout players & teams from Inside Lacrosse!